Snow Skiing was the theme for this B’nai Mitzvah, and the decor evoked the crisp feeling of winter. ● The theme decorations began in the lobby with an “Extreme Terrain” sign above the staircase to the ballroom. ● The ballroom itself was transformed into a white winter setting. The guest tables were topped with grand arrangements of white birch branches set in tall glass vases. Candles suspended from the branches added a soft glow. More candles placed on a bed of “snow” surrounded the base of these displays. ● Each table was named after a different ski run.
A variety of snow skiing theme elements were used in the decorations around the ballroom. These included:
● Ski lifts with images of Zachary and Houston
● A beautiful winter mountain backdrop set behind the kids’ area
● Ski run-themed directional signs
Houston & Zachary’s “Snow Bros” party logo was placed on custom table tops in the kids’ area and in the center of the dance floor. ● Electric blue lighting around the ballroom finished the look of this elegant, winter inspired party. 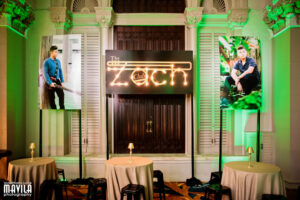 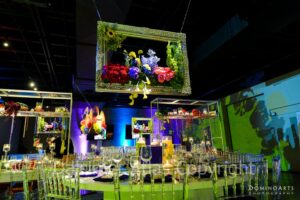